One of GHS’s main goals is to provide students with an environment in which they can think and learn creatively and collaboratively. It is so rewarding, therefore, to hear when former students move on to thrive in careers that take them down a creative, collaborative route.

Misha Nonoo, a member of our alumni community who left the school in 1999, has established a high-profile career as a fashion designer in New York. She won industry recognition when she became a finalist for the 2013 CFDA/ Vogue Fashion Fund and was named one of Forbes ‘30 Under 30’. Since then, Misha has used her innovative concepts to defy the status quo and is the first designer to use social media as a venue for fashion shows.

Misha is now working with her long-time friend Meghan Markle, The Duchess of Sussex, who is the royal patron of Smart Works, a charity that helps British women who are struggling to get back into employment, by offering them sessions in personal styling and interview training. The Duchess has launched an ambitious new project, bringing together key players in the fashion world (Marks & Spencer, John Lewis and Partners, Jigsaw and Misha Nonoo) to produce her first ‘Smart Set’ collection of clothing, including a dress, suit, shirt and tote bag.

For every item sold, each retailer will donate a like-for-like item to the charity. In Misha’s case, this involves her ‘perfect’ white shirt, which is made with truly inclusive sizing and dart placement to suit every woman’s figure. The collaboration has attracted global attention for what the charity is trying to achieve; enabling women to feel more confident and presentable for interviews that might change their lives. 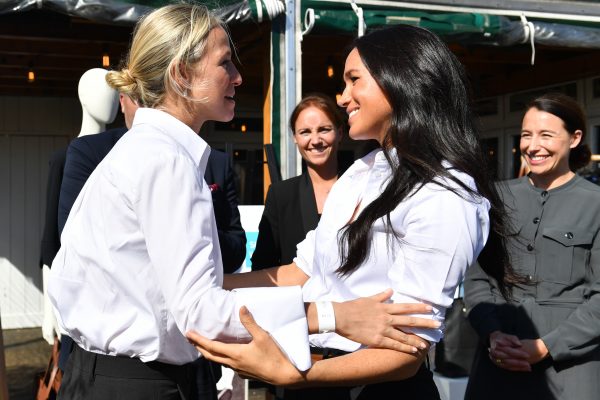 In June this year, Misha brought her eponymous brand to London and made her UK debut with a pop-up shop in London’s Marylebone Village. The reputable designer executed the innovative concept to exhibit mindful shopping with a key focus on sustainable fashion. The pop-up shop presented Misha’s newest collection alongside a plethora of other sustainable beauty, lifestyle and accessory brands including aurelia Probiotic Skincare, EYM Naturals and Silou London.

“This pop-up really captures my
belief in a sustainable future and showcases elements…that are important to me.”

Since then, Misha has made her American debut with an aesthetic black and white chic pop-up store in New York. The store walls are populated with empowering quotes that Misha lives by, such as “Women who wear black lead colourful lives.” The store will run through until December, with Misha’s mission to make this become a permanent feature on the streets of New York City.

We wish Misha the very best of luck for success in this wonderful enterprise!