Guildford High School hosted a talk by Gina Miller last night as part of our ‘Inspiring Women, Inspiring Girls’ series. Gina was joined by three alumni, Harriet Gordon (Class of 2013), Francesca Kolar (Class of 2011) and Natasha Wilson (Class of 2018) who introduced the session and talked to our parents, pupils and staff about studying Politics at GHS, their degrees and career paths to date. 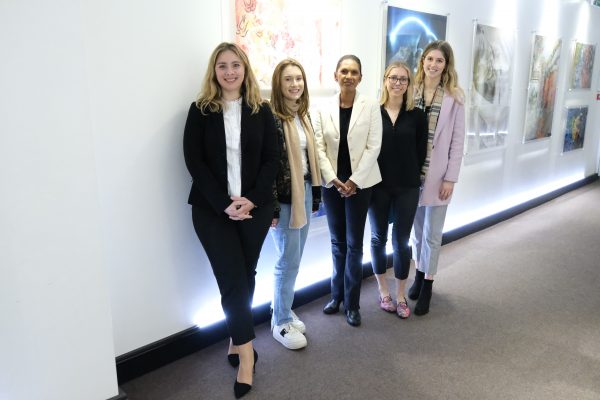 Harriet spoke about her time at GHS fondly alongside her further education at Cambridge studying Social Anthropology and Criminology. She is now a successful Civil Servant working on universal credit at the Department of Work and Pensions. Our second speaker, Francesca Kolar (Class of 2011), inspired us with her tales of her research at the international Criminal Court. She has recently applied for an important position in a commission dealing with the Palestinian problem in Israel. Francesca studied Politics at Newcastle University and is now working as a successful Barrister at 9 Gough Square. They were also joined by Natasha Wilson (Class of 2018) who is currently studying Politics and International Relations at Bristol University.

After a short break, Gina gave an inspiring and passionate speech about caring for the person next to you, calling things out when you think something is wrong and taking responsibility for our future. Gina spoke briefly about her time growing up and her profound respect for her father; having studied a law degree and become a successful Barrister, he taught her the importance of law and justice. She believed her parents never hid themselves from her and introduced her to the real world with real people, lives, policies and politics. 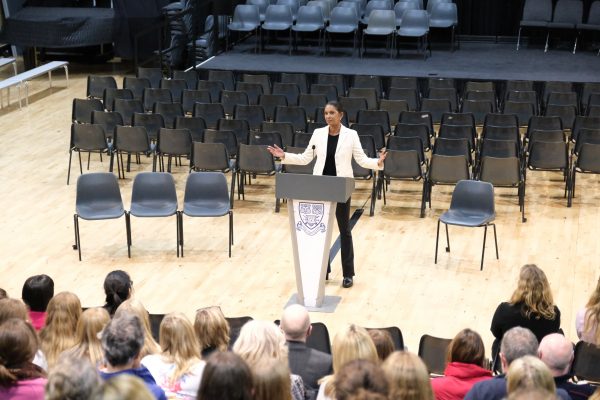 From an early age Gina remembers being obsessed with history, politics and the law and could not understand why people who worked in politics could appear to lack a real passion for it. She described how, for her, politics is a vocation and is fundamentally about caring for others.

From war to water, how you spend everyday of your life is set by policies set by politicians – they decide…politics affects every part of your life – it is about civic duty and personal responsibility.GINA MILLER

Gina encouraged our pupils in the audience to get involved in politics in their everyday lives by, for example, voicing their opinions or attending their MP’s surgery. She claimed that we are in a society today where we tend to forget to care and be responsible. Gina also advised our pupils on how to deal with disagreements with peers and suggested they combat these situations with grace, confidence and humility. She stressed you should always stick by your own values.

She brought her speech to a close by emphasising that politics is not always about being a leader; it takes a team whether that is being the person that brings people together, the person writing speeches, the campaigner or the policy maker. She left us with one message to take away from the evening; take responsibility and do not shy away. She said the world would be a lesser place if we did.

The evening concluded with a Q&A session where topics discussed included the climate crisis, ethical products, the media and accountability of companies vs. individuals.

Thank you to all our speakers for attending the event.