At the beginning of May, pupils, parents, and staff all piled into the Main Hall for the long-awaited Spring Concert. Having not performed a formal concert since November 2019, it was wonderful to enjoy the musical talents of GHS once more. The scores of the evening included hits like ‘Sweet Child of Mine, a medley of ‘The Greatest Showman’ tracks, ‘Tico Tico’, Big Band soul and funk, as well as music by Elgar, Dukas and Rachmaninov. There was something for everyone. The evening was particularly special for Upper Sixth students Eve, Emma and Kate who performed solo pieces. Catching up with them last week, they reflected on their time at GHS, their favourite memories of the Music Department and left us with some parting wisdom for new joiners. 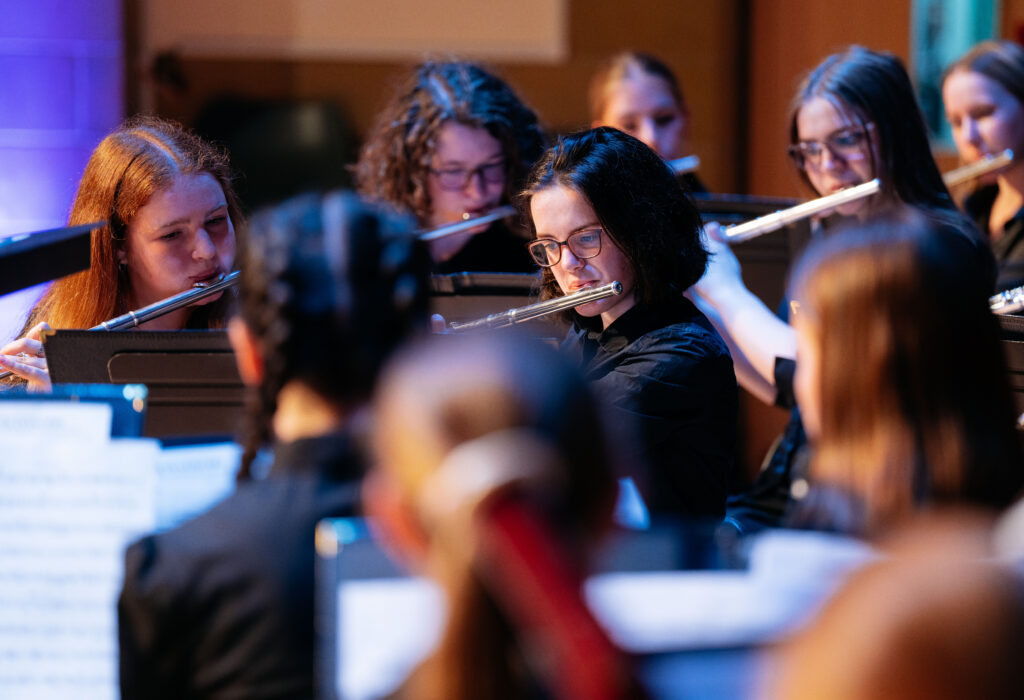 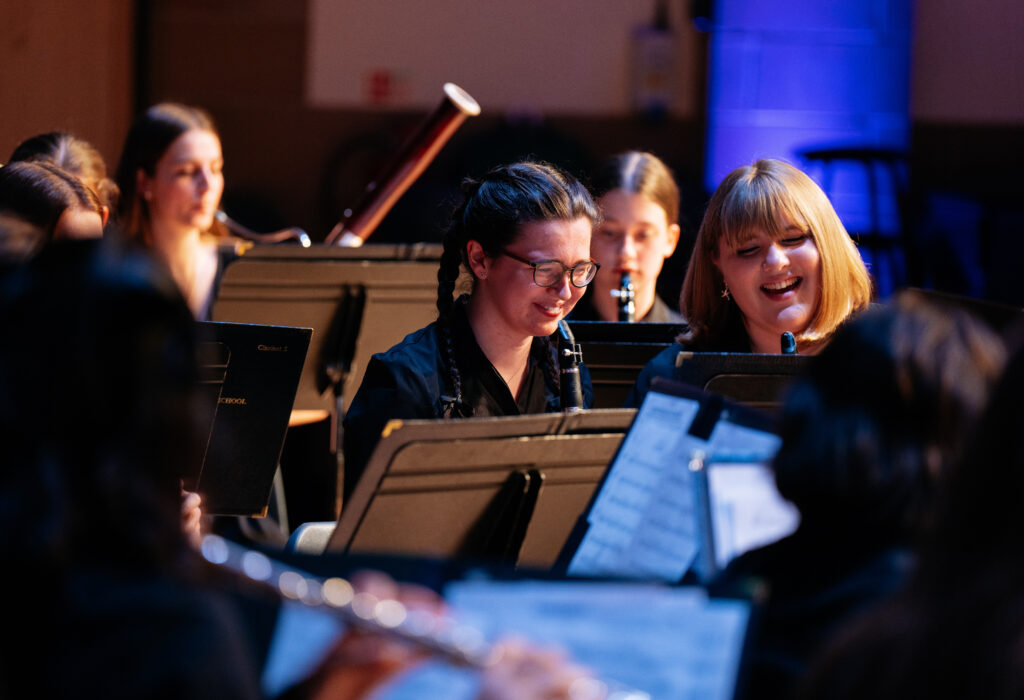 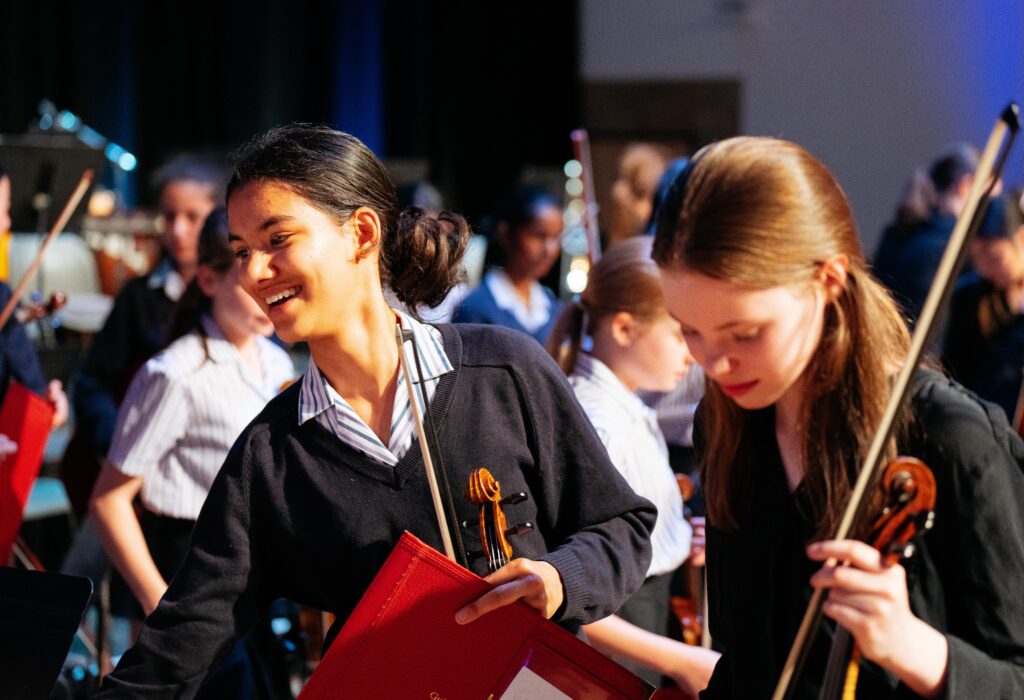 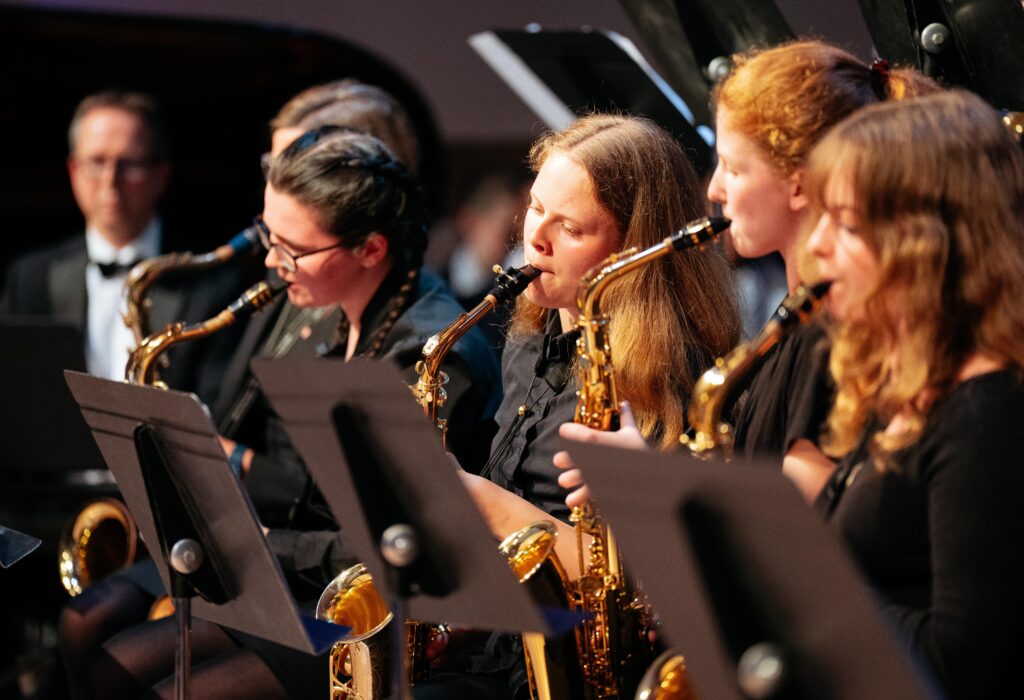 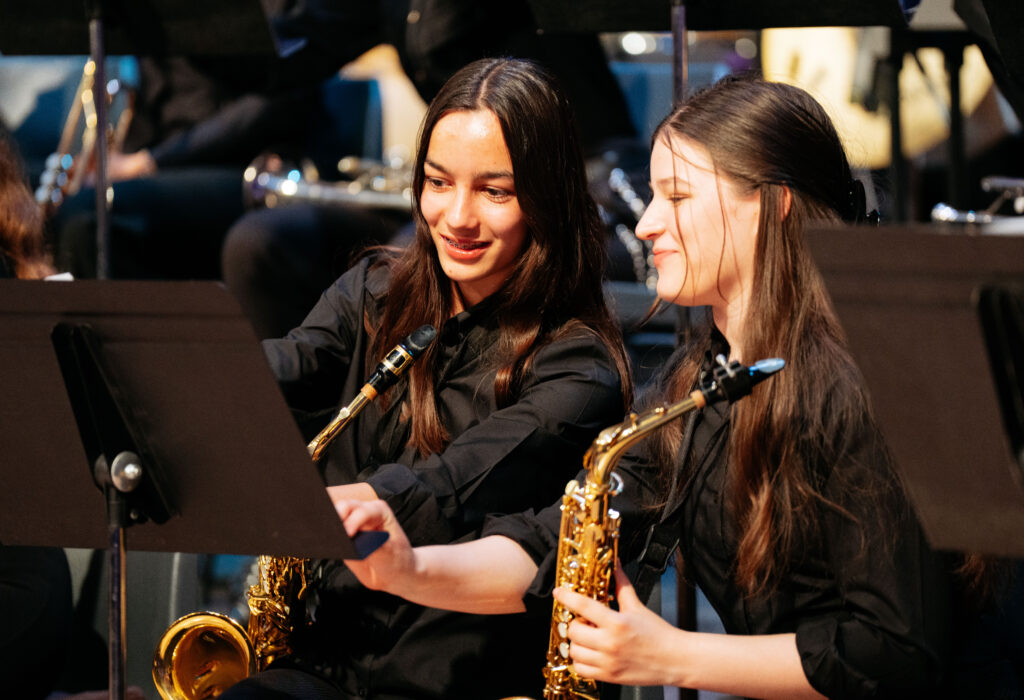 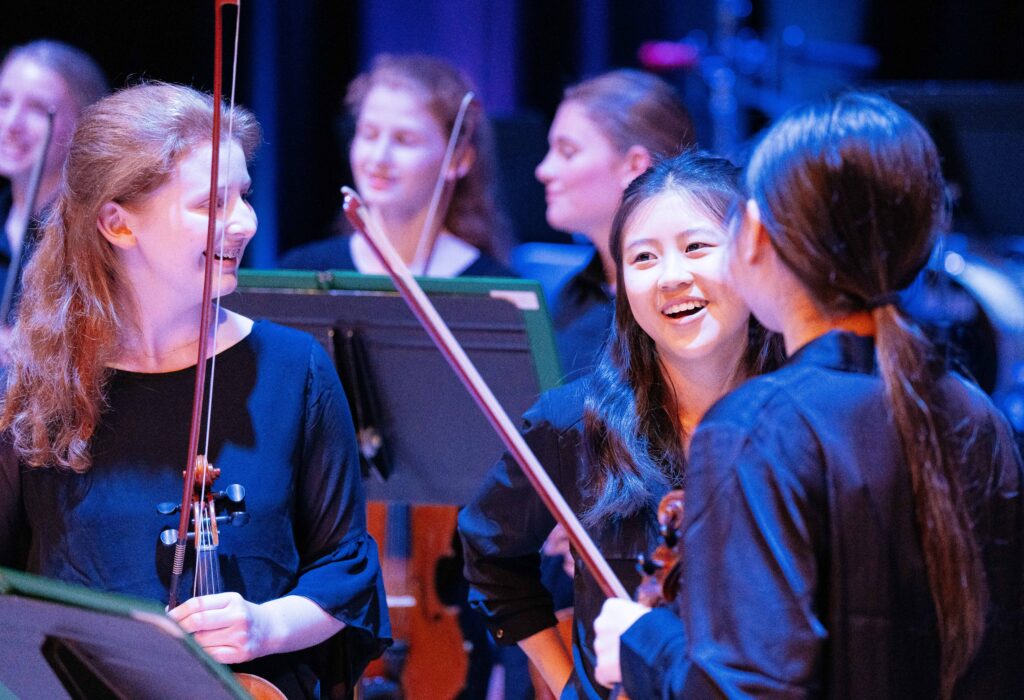 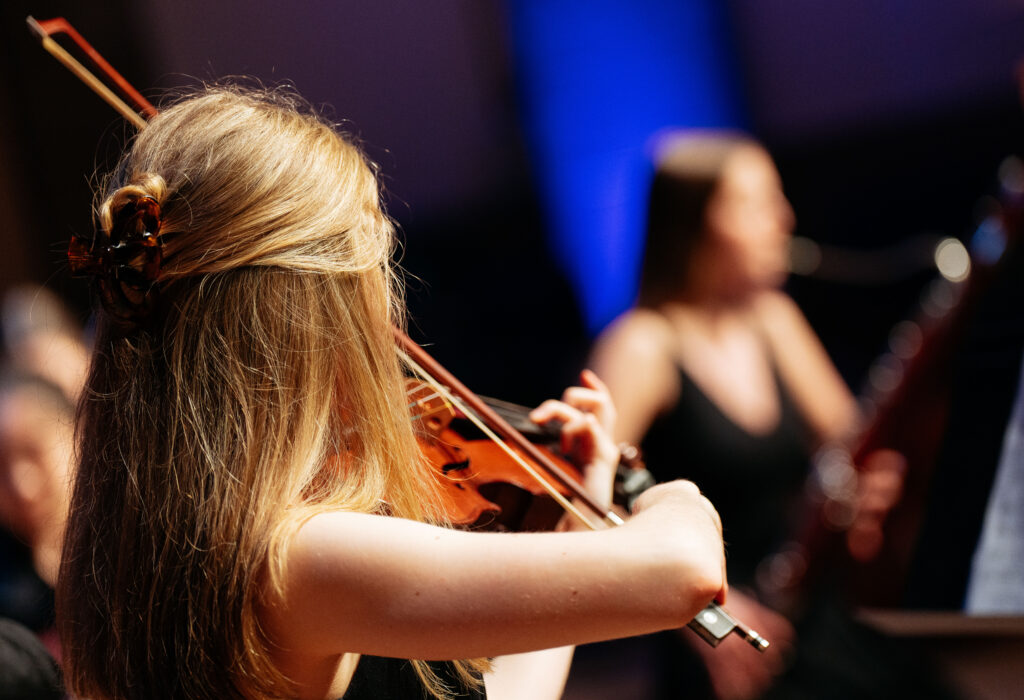 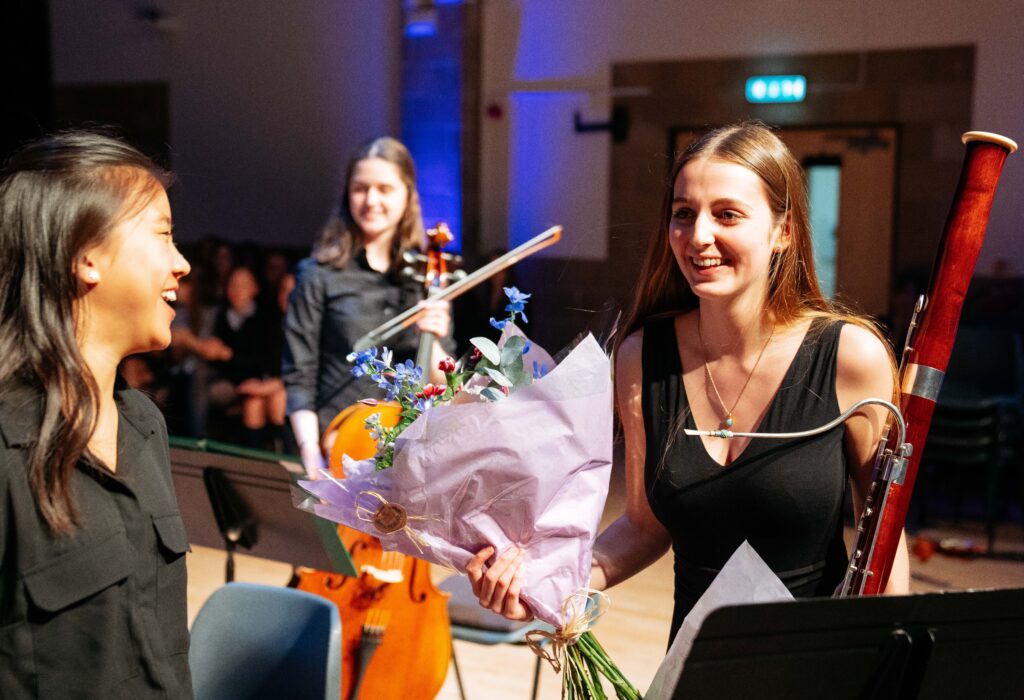 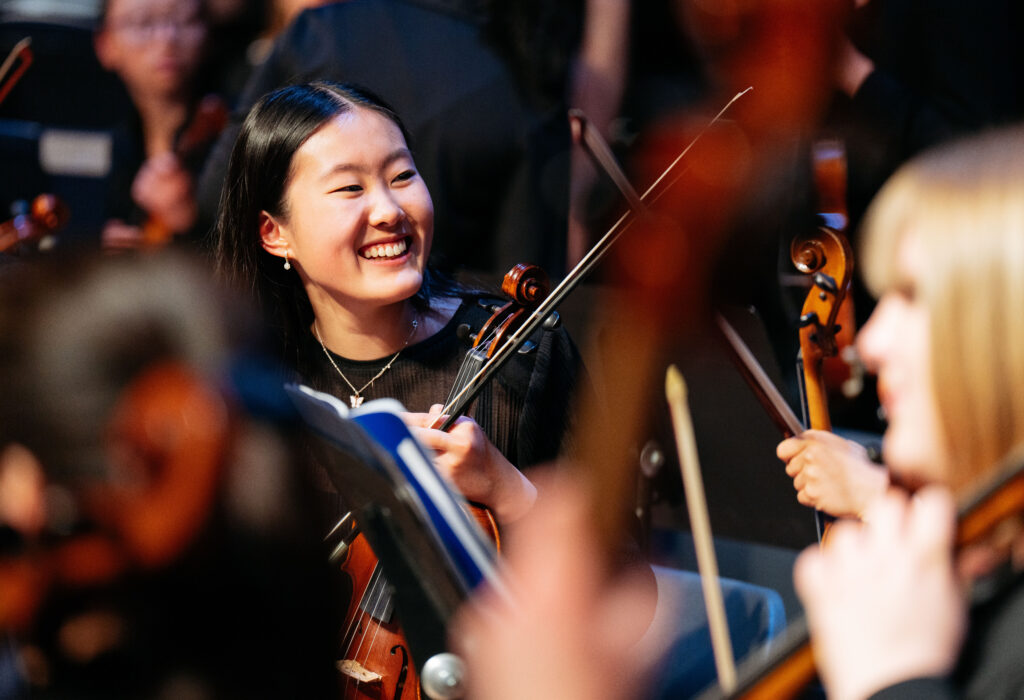 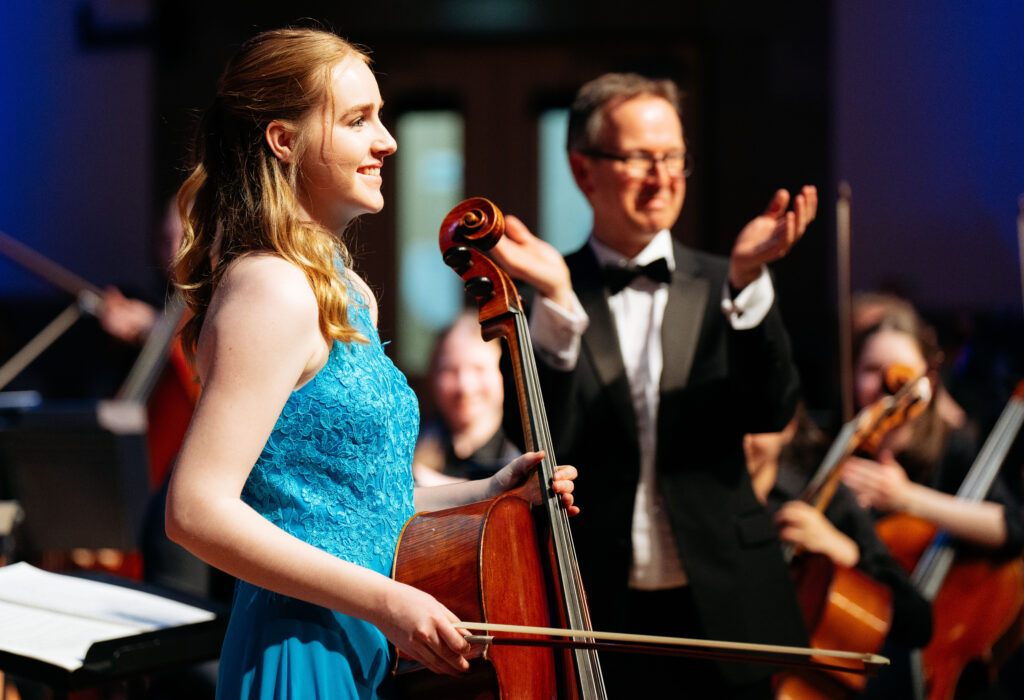 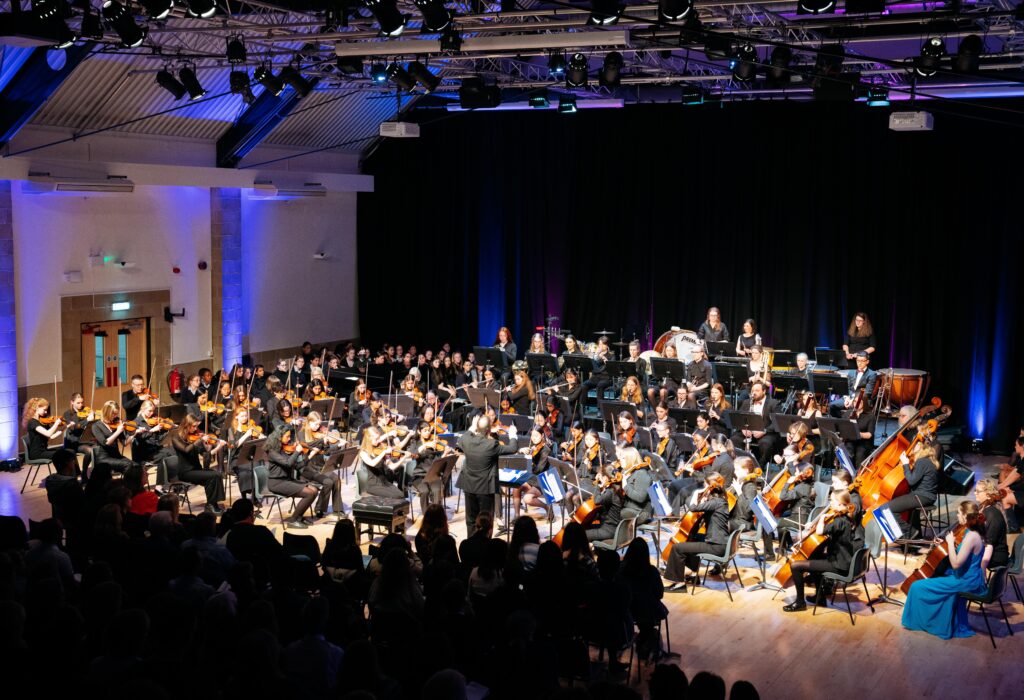 Let’s start by talking about the Spring Concert that happened last week. All three of you had solo concerto performances, how did you find the rehearsals, the lead up to the evening and then the concert itself?

Kate: I found the Spring Concert absolutely incredible. It was quite a surreal experience; there had been a build up for so long with the rehearsals starting in January, but I think it culminated perfectly. It was just an incredible feeling having the whole orchestra behind me and all my friends, I just loved it so much and so glad it came together.

Emma: I also think it was really momentous considering we haven’t had one since November 2019. It made it so much more special just because it was our last concert, and I was so glad we were able to do it. We had such a long wait!

Eve: I definitely agree. It was a really memorable last concert; everything came together at the right time, and it was so nice to play again after so long. I feel like everyone really enjoyed it.

How long have you been playing your instruments?

Eve: I play the bassoon and I’ve been playing since Year 7.

Emma: I started the violin when I was in Year 1.

Kate: And I’ve been playing the cello since I was 10.

You’ve all been at GHS since Year 7 and have obviously been involved in music here the whole time. If you could summarise your experience of music at GHS, what would you say?

Kate: It’s emotional because now we’re leaving, and I would say music is one of the biggest parts of my life at GHS. My closest friends have come from music at GHS throughout all years. It’s so special the way GHS manages to bring everyone together through music and everyone has such a close bond through the choirs and orchestras. It’s just incredible.

Eve: I think music is one of the most inter-year group things. As Kate was saying you get to meet so many people and make so many friends in the different years. I also do Music at A Level, and I have to say I just think the Music Department are the best department. They’re just so friendly and they make the rehearsals so much fun.

Kate: It’s also such a nurturing environment. Having started playing when I was 10 and joining the school when I was 11, my whole playing career has been here. It all starts from the String Orchestra, and it gradually progresses you to bigger groups like Symphony and Chamber Orchestras. I’m just incredibly grateful to have been a part of it.

Eve: It’s a great place to develop your musical skills. When I got here in Year 7 and I got plopped into Symphony Orchestra I was a bit scared, but you learn so much from all the good people playing around you. You feel as you get older you’re getting better and better, so to then get to this year and feel like one of the people leading the orchestra is a really special feeling.

Emma: I think as well when you’re in Year 7 you see all these older girls playing and you feel like they’re playing to such a high standard in comparison, and they seem so amazing. To then suddenly be where they were, and you’ve reached that point you think ‘how is this me now?!’

Kate: They’re just great role models. Yes, the standard is high, but they are people you can look up to when you’re so young. You can envisage that goal ahead. They were all where we were at that age, so you’ve suddenly got this huge group of people backing you and supporting you. It’s really special to now have reached that goal and be that person for a younger girl.

This might be a tough one – what is your favourite memory of music at GHS?

Eve: There’s just too many!

Emma & Kate: Definitely too many.

Kate: Where to start?! I mean the classic one has to be our only music tour to Tuscany!

Eve: That was incredible.

Emma & Eve: We were, and we were the youngest year group that got to go.

Emma: Also, we all played in the band for the musical ‘Oliver’ that was performed by the lower school and that was such a good experience.

Eve: It was so much fun! But I also think all the choir trips with RGS are really fun. When you go to the different towns and cities like Winchester and sing in the cathedrals.

Kate: And of course, the spring concert!

Emma: Well, that has to be in there.

Kate: Even just rehearsals will be a favourite memory. Everyone is always laughing, (probably more than we should be) and it’s just so fun, I can’t stress that enough.

Eve: I’m going to miss it so much.

Do you all plan to continue playing?

To finish up, what advice what you give to a Year 7 who is joining GHS and is maybe considering learning an instrument or trying a music club?

Eve: You’ve just got to get involved, there are so many opportunities so try not to pass up on any you want to do. Just try them, they’re so much fun and you never know where that instrument or club may take you.

Kate: I would agree, just get involved, have the confidence in yourself but also be yourself. Make friends and lots of practice!