While preparing the most recent edition of ‘Highlights’ magazine, our facilities team uncovered the mysterious clock tower graffiti (p.26) and so began the ‘who dunnit’ quest. We’ve had some fabulous accounts from our alumni telling us of their explorations into the clock tower, one of which you can read below.

If you have your own story to tell about the clock tower graffiti, we’d love you to get in touch! 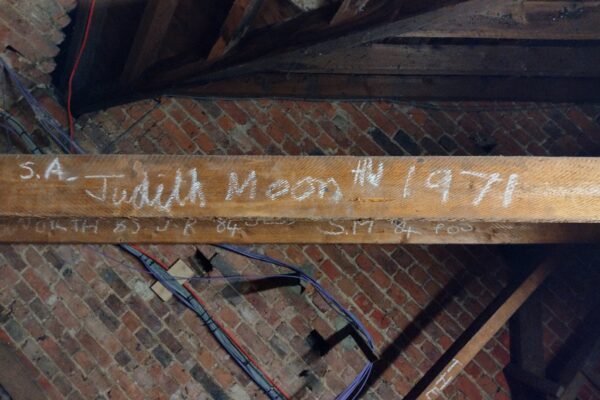 Who dunnit? We did!

I’m sure many readers seeing my name chalked on a rafter thought, ‘Typical Judith Moon!’. Sorry to be so predictable. I had forgotten all about it and was stunned to see my familiar childish hand. But you need to know that our architectural research began with a different adventure.

Someone said that someone had heard that someone thought…that hidden in the roof was a book of signatures with dates going back decades. Explorers who reached the summit had apparently recorded their achievement for posterity. The challenge to find out if this was true was irresistible, and of course, if there really was a book, we must sign it!

Anne Brunton and I (with two others) believed that the book might be located in the attic space above the Junior Library. The loft hatch was in the middle of the room so getting up there would be tricky. Taking planning seriously, we agreed to catch the early train to see if 8.15 would be an appropriate time for our project.  No one around. We sized up the room and worked out that we could slide a filing cabinet under the loft hatch, and from there, climb up. Another early train (we must have been very committed!) and we were up in the attic…

But all for naught. It was too dark to see. Abort location, girls! I was the smallest and was left sitting with legs dangling from the hatch while the others got down quickly to shove the cabinet into place. They could easily catch me from there. I chatted about what I could see and how many torches we’d need, when suddenly I realised it had gone silent below. Then, “Get that child down!”. How we loved Mrs Rumbelow and how we didn’t want her to be disappointed in us. I was lowered down and we were sent away. Later we were sent to Miss Nisbett’s office. The Deputy Head had been our form teacher in 1X and we adored her, too, but were scared we were in trouble. To try to alleviate the anger, we excitedly explained about the book and how we just had to find out.

A few days later we were called to ‘Nizzie’s’ office again. She had asked Mr Story, the caretaker, to search for the book in the attic. She drew open a desk drawer and pulled out a loose-sleeved notebook in a plastic cover. She told us what was written in it and was inevitably fascinated, too. Feeling guilty that we might have ended a great GHS tradition we asked if it could be replaced for future quests, and believe it was.

Neither Anne nor I can recall how we found a new hiding place for our squash and apples at breaktimes -when the furniture store at the edge of the playground got too chilly in winter. But a few steps from the Junior Library was a cupboard opposite Mrs Pieser’s Craft Room. The door was about a metre square and opened at our waist height. It was dark and warm, but rather squashed. We had to be very careful moving in and out partly because we didn’t wish to damage the portfolios stored there, and partly because we’d be easily spotted in a busy thoroughfare.

Shuffling back as far as I could to give more space, I now remember realising that the cupboard had no back (nor fur coats!). Who would not have wondered where it went? Bringing torches, I guess we found signatures on the rafters. Being small, it was easy to scramble on my tummy further back. Anne remembers having the role of lookout at some point during the rafters campaign. She was at the bottom of the stairs checking out for teachers. We have no memory of chalking names, nor of being caught. Perhaps this time, we weren’t. Nor do we know if other girls who signed their names got there via this cupboard.

We like to think that rather than being just naughty girls, we were endeavouring to keep a good, ancient tradition going for GHS girls past and present!

On reading this, Anne’s husband Ian, commented that we “were rather naughty”. I suggested that there’s a fine line between being naughty and being creative adventurers. I hope you agree.