A tribute to Miss Dutton 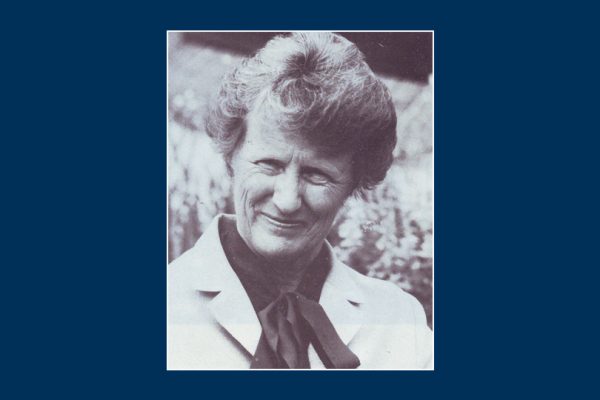 For fourteen years Joan Dutton upheld the School’s motto “As one that serveth”. Under her wise leadership and guidance the High School developed and expanded so that visiting Old Girls and former staff needed a guided tour!

The School became three-form entry in the Senior School, the Sixth Form grew and pupils entered the Junior School from four years old. The scattered collection of studios and wooden laboratories was replaced by the Jackson Wing, and Food Technology and Textiles – formerly Domestic Science- moved out of the classroom above the Morton House Music Room. The Wing, with rickety screen between Rooms 7 and 8, which was inhabited by Fifth Formers and used for O-Level examinations, was replaced by a complete block of classrooms next to the extended Senior Library. These developments, together with the acquisition of Albany House and imaginatively created Wolfson Design Centre, rationalised and enhanced the facilities offered to pupils.

Joan presided over many splendid, varied and happy occasions during her time at GHS, in particular, the events and celebrations for The School’s Centenary 1888–1988. From the Centenary Luncheon in the Great Hall of Guildhall in the City of London for the whole School followed by afternoon excursions, the Centenary Thanksgiving Service in Guildford Cathedral where the Kindergarten walked the length of the Cathedral bearing candles, the Centenary Music Festival to the first performance of the specially commissioned “Jonah” by William Mathias.

Parents, teachers and former pupils united under her inspiration to form the Friends of Guildford High School. The Friends not only raised money for projects such as the School’s first minibus but gave many opportunities for educational and social activities. Parachutists and escapologists landed on the Playing Field during Friends’ Fetes; audiences dressed up for the last night of “The Boyfriend” and “My Fair Lady”; parents joined girls and staff for performances of “Jonah” and “Messiah” in the Cathedral. Those attending First Year parties admired the thoroughness with which she prepared her fancy dress – particularly remembered are the spacesuit, the leopard and the punk rocker!

We are immensely grateful to her for all that she did for GHS, for the energy and devotion she showed to all aspects of the School’s life, and we are proud of her achievements.